(HorizonPost.com) – Country singer Blake Shelton said that he is leaving “The Voice” next year to focus on his wife, Gwen Stefani, and raising their children, according to The Daily Wire. Shelton reportedly made the comment during an interview with People.

In the interview, he explained how raising his three stepsons, who are aged 8, 14, and 16, has changed him.

“They’ve taught me something about myself that I never knew: I’m more than just a country singer or a goofy guy,” he said, adding that he is someone that he count on and that was not a responsibility that he did not previously have.

Shelton said that he and his wife had spent their entire careers traveling on the road, but that now they are satisfied staying around the home.

“When I started on ‘The Voice,’ that was 10 years into my career as a country artist,” he said. “I never really made it to the A-level of country artists until I became a coach,” he continued, saying that that the show did a lot more for him at the beginning than what he could do for it. And now that he is done, he says that he “far exceeded anything I thought I could ever accomplish in the entertainment world.”

Shelton also spoke of the importance of prioritizing his wife, who is seven years older than him, and his three stepchildren. He said that he takes his job as a stepparent seriously and when they ask why he is not there, he takes it to heart.

“I’ve made plenty of money, but you can’t buy time back. I don’t want any regrets.”

Stefani said that a month before she met Blake she had thought she was going to be lonely for the rest of her life following her divorce.

“God just put us together. It was like one of those miracle situations where I didn’t see it coming,” Stefani said. 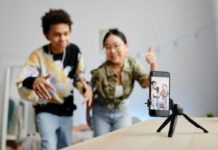